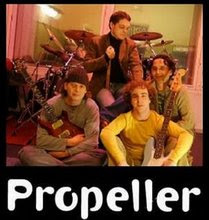 Propeller was founded in 1999, by guitarplayer Willem Niehorster, joined by Johnito.

Through the years the band has been playing with several different drummers and bassplayers. Among the drummers were Raymond "El Tente" Drenth, Sjoerd van Veen, Atila, and Michiel Coolen. Among the bassplayers were Arie "Nutboom" Eikelboom and Donny "P-Nut" Mulders.
Musically spoken the band is influenced by 80's and 90's crossover-bands like Faith No More, King Crimson and Urban Dance Squad.


Propeller also supported the first big protest against the Dutch Balkenende administration, by
playing at the Dam Square in Amsterdam: video

In 2006 the remaining bandmembers decided to split up, to find some time to work on their own projects.

In the autumn of 2007 drummer Michiel Coolen , singer Johnito and guitarist Willem Niehorster decide to get back together, aiming at having renewed fun on stage.

As we speak, just have found a new bassplayer, named Niels Zeven, so the band is up and running again!


For latest developments concerning the reunion: visit our newspage. (in Dutch)